Project Soil is an extremely cheap & easy to use system to collect & manage soil data on a global scale. On a planet with more than 7 billion people, it is essential to control the conditions of the soil & understand how to sustain it. Project Soil's cheap digital soil testing kit & light infrastructure (data collection & fruition via web & SMS) will allow all growers to understand their land, crops & choose suitable seeds for their soil, thereby yielding better crops with less pesticides.

This project is solving the Soil Testing Kit challenge.

During the Space Apps Challenge 2013, at the Google Campus in London, we have developed Project Soil: an extremely cheap and easy to use system to collect and manage soil data. 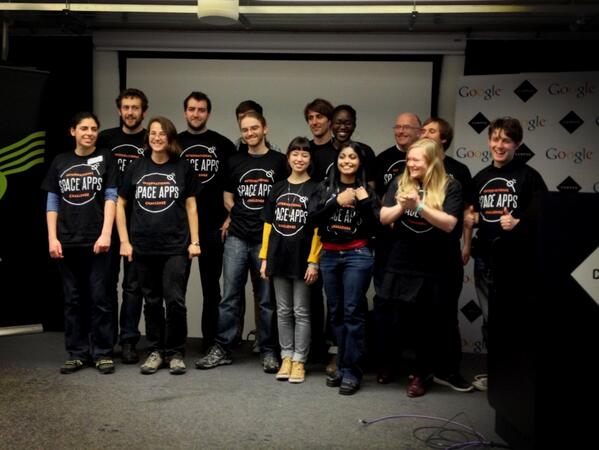 We kept in mind that not all the world is as lucky as us and there are plenty of places where internet is slow or completely absent and where there is much less money around. With Project Soil we created an open system that includes:

We spent the first part of the challeng looking at all our different backgrounds and skills and reformulating the challenge in a series of smaller ones that we feelt we could face. As you can see from the image below, Project Soil is made by three big interlaced projects, each of them with a particular focus: acquiring data, collecting it and make it available.

In this part of the projected we aimed to create a proof-of-concept soil testing kit that could be miniaturised and mass produced. This can then upload recorded soil data, taken over a period of several weeks, to a central database via a phone application or computer interface. The hardware team realized in an amazingly short time a working prototype of probe to collect soil data. In the first version an Arduino was collecting data from various sensors and sending it to a Rasperry Pi programmed to forward it to our database. In addition, the aim was to create a PCB schematic and layout to implement this system realistically and cost such a device. CAD models were created to aid development and concept presentation.

The hardware prototype is a proof of concept, a final device should use a much cheaper MPU such as an ATMEGA48A-MU 4K memory, 8-Bit MPU. This can be sourced (in bulk) for less than 80p per unit.

The probe and its price breakdown

In fact, from that prototype the hardware team engineered a small and cheap device that you can simply plug in the field and leave alone collecting the data. Afterward it is enough to have a USB connection to collect the data and send it to our servers. For whom may be interested, the price of the final device can be overestimated as follows:

Keeping in mind that not all the world is covered by internet, we used the twilio API to create a service to send the data directly through SMS. This makes it good for use in more developing regions of the world. Send a text to 01952 787011 containing a list of readings for the following parameters pH, temperature, moisture, lat/latitude and long/longitude and then will be added to the dataset. The list of key, values can be separated by whitespace or , delimited and the order doesn't matter

You will receive back a message confirming the data your sent and that it had been saved to the database.

While the SMS data goes directly to the database, all the rest of the communication is made by means of MQTT, a machine-to-machine (M2M)/"Internet of Things" connectivity protocol designed to be extremely lightweight. In this way we can move all the management of the data to our server and consume as less power and bandwith as possible on the clients.

Again keeping in mind to consume as less bandwith as possible, we designed and developed an extremely intuitive and nice application, completely based on HTML and CSS, and with nearly no image. In this way people can access the data using any device, not just the last generation of smartphones, consuming nearly no bandwidth! You can already test our web app going to Soil App

Ideas for the future

The possible implications and improvement for the future are the most variuos. Here there is a small list of what we could and would like to achieve: Project Soil on other Planets

And with our small collaboration with Salsola we are ready to fly into space and collect extra terrestrial soil data!

Look what we did going to the Git Hub page, looking for our hashtag #pplofthesoil on Twitter, watching our presentation or reading our "storified" weekend story Come and take root with us, we are all People of the Soil!

Congratulation to all the winners of the 2013 International Space Apps Challenge. We didn't win but we've got a Honorable Mention on the Global Impact category!!!!

We are going on with the project improving the probe and the applications. If you want to be involved join us on our github page.